London And St. Thomas Association of REALTORS® Urging All Residents to Help Stop the Spread of the Municipal Land Transfer Tax

Following recent revelations that the Ontario government is considering expanding powers to charge a municipal land transfer tax province-wide, the London and St Thomas Association of REALTORS® is calling on local residents to send a clear message to their MPP to oppose this tax at an upcoming vote in the legislature on December 3rd.

"If this tax was implemented in London, home buyers would be forced to hand over $5,351 in total land transfer taxes on the average priced home," said Carl Vandergoot, President of the London and St. Thomas Association of REALTORS®. "This will be a barrier to families looking to achieve their dreams of home ownership, and will have serious impacts on the local economy. Every home transaction generates $55,000 in spin-off benefits, which creates jobs and supports local business." 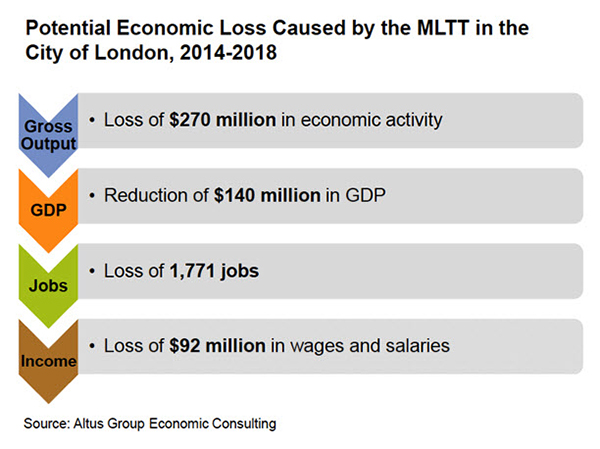 With the launch of radio advertisements across Ontario this week, the London and St. Thomas Association of REALTORS® and the Ontario Real Estate Association (OREA) are encouraging everyone to take two minutes to visit www.DontTaxMyDream.ca and urge their MPP to prevent the spread of the municipal land transfer tax. The vote in the Ontario Legislature follows the introduction of a motion by Leeds-Grenville MPP Steve Clark, which asks all MPPs to recognize the harmful effects of the tax and vote against allowing it to expand to municipalities across Ontario.

"A recent Ipsos Reid poll showed that nine out of ten Ontarians don't want this tax," said Vandergoot. "We must get this message to our local MPPs to ensure that they hear the voice of their constituents before they vote on December 3rd.

A municipal land transfer tax enacted by the City of Toronto in 2008 led to an estimated 16 per cent drop in housing transactions. This cost the City of Toronto $2.3 billion in economic activity and 15,000 jobs. The spread of the MLTT would make Ontario the most taxed jurisdiction in North America for home buyers. The London and St. Thomas Association of REALTORS® and OREA are working to protect home ownership by ensuring that the provincial government does not move ahead with allowing the tax to spread province-wide.