REALTORS® wrap up 2014 with donations

On December 10, 2014, Heather Arnott, Chair of the LSTAR Quality of Life Advisory Group, presented Steve Cordes, the Executive Director of Youth Opportunities Unlimited (YOU) and her fellow LSTAR Director Dan Grantham, Past President of YOU, with a cheque for $5,000. The money is to be used towards outfitting a home and safe haven for young mothers and their babies in the community. “The recent closure of the Bethesda Centre has made it far more likely that these girls and their children might slip through the cracks,” says Arnott. “We don't want to see that happen.” “We are very grateful to Y.O.U. for stepping forward and offering to bridge this serious gap in service,” adds LSTAR President Jim Holody. “It's a worthy project and one we are happy to support.” 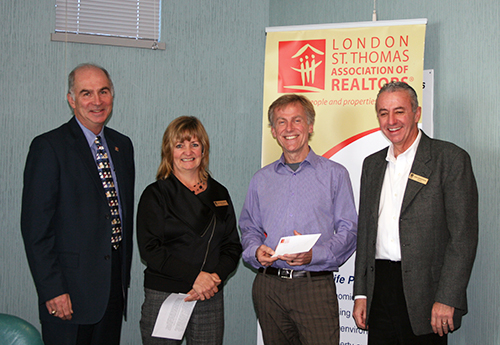 Arnott also presented a second cheque for $5,000, this time to Hockey Helps the Homeless, a national charity that organizes one day fantasy tournaments in Canadian NHL cities and, beginning in May 2014, in London, the first non-NHL City to host the tournament. The 2014 event raised $120,000 for Merrymount Family Crisis and Support Centre, YOU and the Unity Project. LSTAR was a sponsor of the 2014 event, organized locally by a committee chaired by LSTAR's Director of Business and Promotions, Tracy Marino, with the assistance of over 70 REALTOR® volunteers. One of these, LSTAR Director Dan Grantham, and Tracy Marino were on hand to receive the cheque, which secures LSTAR's sponsorship of the 2015 tournament. “Merrymount, YOU and the Unity Project are all organizations LSTAR has or is actively supporting,” adds Holody. “Hockey Helps the Homeless is just a fun way to do that – everybody wins.” 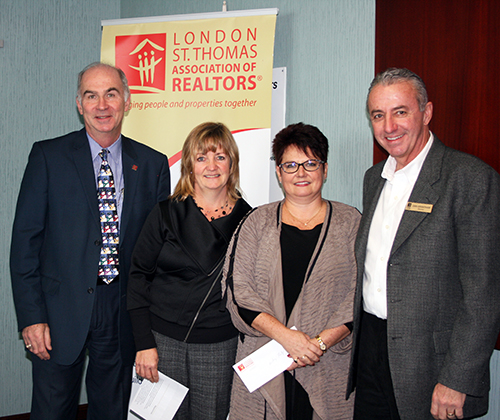 Finally, Arnott presented St. Joseph's Marisa Kanas and LSTAR Member and Hospice volunteer Christine Cecchetto with a cheque that fulfills the Association's pledge to donate $50,000 to the hospice over a two year period beginning in 2013. “Thanks to Hospice, there's now a place in our community where families can be with a loved one in his or final days in a more homelike setting,” says Holody. “A residential hospice was something we've needed for a long time in our area and we were grateful to the Ontario REALTORS Care Foundation for allowing us to contribute to this important project.” 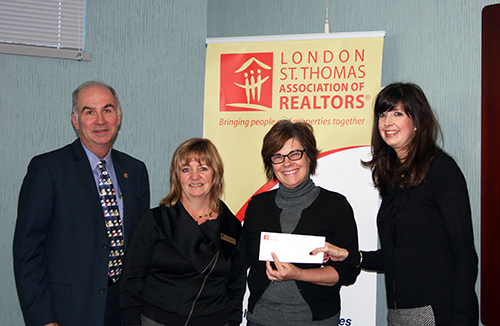 Click here to read the original News Release of LSTAR.