The London and St. Thomas Association of REALTORS® (LSTAR) announced 637 homes exchanged hands last month, down 13.6% from the same time a year ago. Meanwhile, year-to-date sales are up 9.1%, with a total of 10,790 homes sold, marking 2017 as the year with the highest number of residential sales since LSTAR began tracking data in 1978, with one more month to go.

"This historic milestone reflects the incredible year we've had in residential real estate across the region," said Jim Smith, 2017 LSTAR President. "The activity in the final quarter of the year echoes what's happening nationally, according to the latest report from the Canadian Real Estate Association (CREA), who expect positive momentum to continue in December."

The following chart is based on data taken from the CREA National MLS® Report for October 2017 (the latest CREA statistics available). It provides a snapshot of how average home prices in London and St. Thomas compare to other major Ontario and Canadian centres. 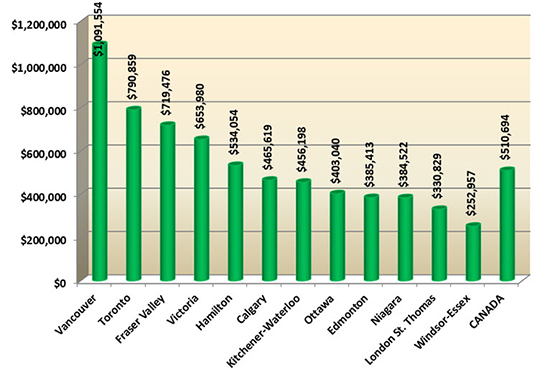 According to a research report1, one job is created for every three real estate transactions and approximately $53,000 in ancillary spending is generated every time a home changes hands in Ontario. “Based on the monthly total for November, that translates into creating approximately 212 jobs and positioning us to potentially generate more than $33 million back into the local economy,” Smith said.

*These statistics are prepared for LSTAR by the Canadian Real Estate Association (CREA) and represent a data snapshot taken on December 1, 2017, based on reported sales activity between November 1 and 30, 2017.