In April 2022, 877 homes traded hands in the London-St. Thomas area and 1,609 new property listings were posted on the MLS® System of the London and St. Thomas Association of REALTORS® (LSTAR). The local housing supply bounced up to 1.2 months of inventory in April from only 0.6 months in March.

“These figures suggest a soft landing of the local real estate market: the April home sales are on par with the ten-year average and last month's sales-to-new listings ratio of 54.5% signals that we’re trending towards a more balanced market,” said Randy Pawlowski, 2022 LSTAR President.

"There is nothing dramatic about the decline in home prices. These single-digit decreases were actually expected after two consecutive interest rate hikes by the Bank of Canada and the Ontario Government's decision to expand and increase the non-resident speculation tax," Pawlowski explained.

“In April, the average price for a single-family home in LSTAR's jurisdiction sat at $840,415, that of a condo – at $618,049, and the overall average price for an apartment – at $476,283," Pawlowski said. "Speaking of apartments, it's interesting to see that their HPI benchmark price increased in April by 3.7% over the previous month, while the benchmark prices for all the other home types saw month-over-month single-digit reductions," he noted.

The following table shows the April benchmark prices for all housing types in LSTAR’s jurisdiction and how they measure up to the values from a year ago.

"Even if it's much higher than in many cities from Alberta and Saskatchewan, LSTAR's aggregate HPI benchmark price places our area among the most affordable in Ontario," Pawlowski observed. The following chart is based on data provided by the Canadian Real Estate Association (CREA) for April 1st, 2022. 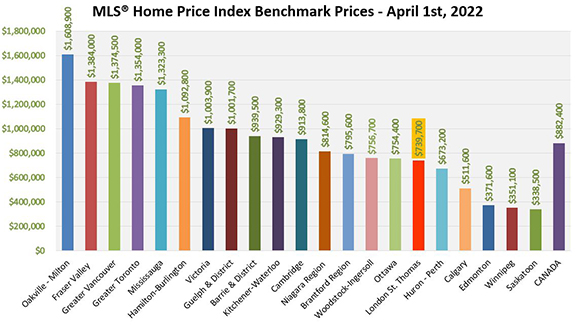 According to a research report by Altus Group, a total of $73,250 in ancillary expenditures is generated by the average housing transaction in Ontario over a period of three years from the date of purchase. "In other words, our April home sales could potentially generate more than 64 million in spin-off spending over the next three years, thus making an important contribution to the local economy,” Pawlowski concluded.