The London and St Thomas Association of REALTORS® (LSTAR) had another record-breaking month: in July, 1,043 homes* exchanged hands in LSTAR’s jurisdiction, 5.4% more than in July 2018 and only seven units less than in June 2019.

“Looking at last month's home sales in the five main regions of LSTAR, it's worth to note that Middlesex County saw its best July in the last decade, with 99 units sold" Taylor stated. "Moreover, during this same period, 678 homes were sold in London, which marks the second best July ever for residential sales in this city. In addition, Elgin County had its third best July on record, with 76 homes sold," he added.

"In St. Thomas, there were 73 home sales last month, which is right on par with the 10-year average number of residential sales in this city for the month of July. On the other hand, in Strathroy, where 29 home sales were recorded last month, the volume of July home sales is slightly higher than the ten-year average," Taylor observed.

“Analyzing the sales-to-new-listings ratios across LSTAR’s jurisdiction, it's safe to say that most of the Association's regions are currently Sellers' markets, with the exception of Middlesex County, where this ratio sits at 56.7%, which moves this market into a more balanced territory," Taylor emphasized.

According to a report by the Canadian Real Estate Association, last month, in London, the median number of days that a home was on the market was 13.5 - up from 10 days last month.

The average home price in the Association’s jurisdiction was $404,950.

The following chart is based on data taken from the CREA National MLS® Report for June 2019 (the latest CREA statistics available). It provides a snapshot of how seasonally adjusted average home prices** in London and St. Thomas compare to other major Ontario and Canadian centres. 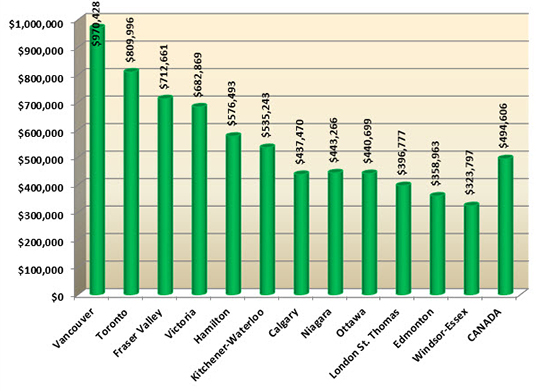 According to a research report1, a total of $67,425 in ancillary expenditures is generated by the average housing transaction in Ontario over a period of three years from the date of purchase. “Based on the home resales in July, that’s generating potentially more than 70 million dollars back into the local economy for the next few years,” Taylor concluded.

*These statistics are prepared for LSTAR by the Canadian Real Estate Association (CREA) and represent a data snapshot taken on August 1, 2019, based on processed home sales activity between July 1st and 31st, 2019.