980 homes sold in July 2014, making last month the second best July on record, surpassed only by July 2007, when 1,009 homes exchanged hands.  "This month's sales, like those of May and June, point to a strong recovery on the part of our local market," says Jim Holody. "The market was in lockdown during an exceptionally long, drawn out winter and unusually cool Spring. Now it's in overdrive."

781 detached homes exchanged hands last month, up 24%; condos were up 25.9%, with 199 sales. All in, sales were up 24.4%. Listings were also up – 15.9% for detached homes and 16.1% for condos, as were Active Listings End-of-Period (inventory) by 3.6%. The market remains balanced, making the playing field for buyers and sellers a level one. "These kind of numbers speak to an uptick in consumer confidence," says Holody.

74 homes sold in St. Thomas, down four units from the previous July.  "Notwithstanding this, this July is the second best for St. Thomas in seven years and, given that the ten year average for this month is 71, it's safe to say that the St. Thomas market continues to perform well." The average price for a home in St. Thomas Year to Date stands at $203,774 – up 1.1% over December 31, 2013.

The following chart, based on data taken from CREA's National MLS® Report for June 2014 (the latest information available), demonstrates how homes in LSTAR's jurisdiction continue to maintain their affordability compared to other major Ontario and Canadian centers. 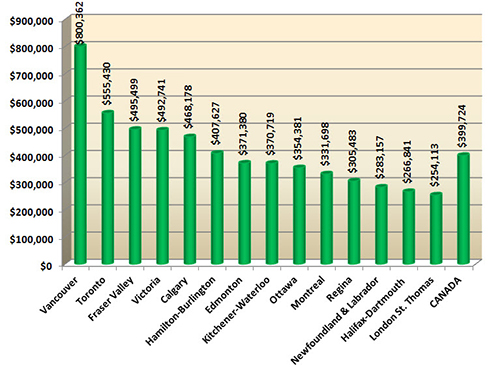 The best-selling house style in LSTAR's jurisdiction for July 2014 was the two-storey, followed by the bungalows, the ranches, the townhouse condominiums, and then high rise apartment condos.

Read the full News Release of LSTAR for July 2014.