February 2012 saw a 15.4% increase in local real estate sales over the previous year, with 500 detached homes and 137 condos exchanging hands over the course of the month. “It should be borne in mind, however, that, while February 2011 had 28 days, February 2012 had 29 days,” says Barb Whitney, President of the London and St. Thomas Association of REALTORS®. “The extra day skews the numbers somewhat. If we leave out the sales that took place on February 29 of this year, 478 detached homes sold, up 9.6% over the previous February; 132 condos sold, up 13.8%; and total sales were up 10.5%. Even so, there's no doubt that the year is off to a great start. We are especially pleased to see more activity in the condo market, which has been a little soft over the past few months. We are heading into what's shaping up to be a very busy Spring market,” observes Whitney. “The number of new listings processed in February was up a significant 14.2%, while the number of active listings at month's end – in other words, our inventory - was up 0.9%. This means that properties are moving – good for sellers - but there's also lots to choose from – good for buyers. In other words, our local market continues to be balanced. And the unusually warm and clement winter certainly hasn't hurt. Weather always factors in, good or bad.”

The following chart, based on data taken from CREA's National MLS® Report for January 2012 (the latest information available), demonstrates how homes in LSTAR's jurisdiction continue to maintain their affordability compared to other major Ontario and Canadian centers. 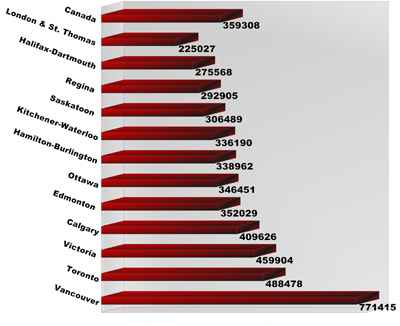 The best-selling house style in LSTAR's jurisdiction last month was the two-storey, followed by the bungalow, then the ranch, then the townhouse condominium.

Read the entire News Release of LSTAR for February 2012.