Despite record-breaking cold, a total of 535 homes sold in February. "Given that the average number of February sales over the past decade stands at 489, I think it's fair to describe February 2015 as a good, solid month for home sales," says Carl Vandergoot, President of the London and St. Thomas Association of REALTORS®. He cautions against comparing February 2015's activity with that of February 2014. "It wasn't a typical year. The Polar Vortex had home sales in a deep freeze lockdown in January and February 2014. Comparing the two month-over-month would not only be counterproductive, but it would also give a false impression."

Also up for February were listings by 6.2% - while inventory - active listings end of period – was down a marginal 1.3%. The market continues to be a balanced one.

February 2015 was also a good month for London's Sister City of St. Thomas. "Fifty four homes sold last month, making it the best February on record for St. Thomas since 2007," says Vandergoot. The average price of a home in St. Thomas Year to Date stands at $203,008, up 1.6%."

The average price of a home in the Association's entire jurisdiction, which includes Middlesex and Elgin Counties, stands at $248,056 Year-to-Date, down 2.4%. “This is an average price, rather than a median,” explains Vandergoot. "The figure will fluctuate based on what is sold at what price in any given month.

The best-selling house style in LSTAR's jurisdiction for February 2015 was the two-storey, then the bungalow, followed by ranches, then townhouse condominiums, then high rise apartment condos.

The following chart, based on data taken from CREA's National MLS® Report for January 2015 (the latest information available), demonstrates how homes in LSTAR's jurisdiction continue to maintain their affordability compared to other major Ontario and Canadian centers. 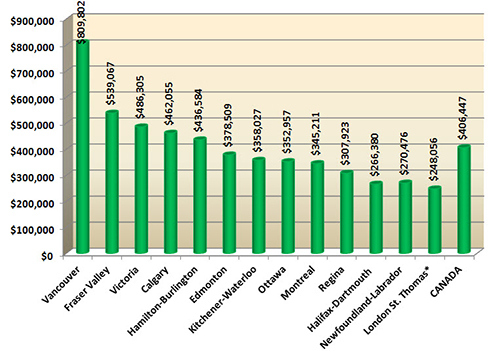 "These stats are good news not just for REALTORS® but for our local economy as a whole," says Vandergoot. "According to research by the Altus Group, one job is created for every three real estate transactions and approximately $53,000 in ancillary spending is generated every time a house changes hands in Ontario."