The London and St Thomas Association of REALTORS® held its sixteenth annual Homes for Hope® Bonspiel on January 19, 2013 at the Ilderton Curling Club.

This popular event is a fundraiser for Mission Services of London.

"One of the principal tenets of the Quality of Life philosophy to which REALTORS® subscribe is our belief that everyone should have access to safe, affordable housing," explains Doug Pedlar, LSTAR President. "Mission Services has been providing shelter and assistance to the homeless and disadvantaged in our community for over a half a century. We're proud to be counted among their supporters."

This year's event raised $11,085 for the charity, bringing the total raised by the bonspiel since its inception to over $124,885 and the total raised by the Association through both the bonspiel and other fundraisers, including the very successful Homes for Hope® pins, to $282,591.  The money will be given to Mission Services at LSTAR's Annual General Meeting in April 2013.

The winning team was comprised of Russ Chadwick, Tony Verberne, Steven Horvath and Past LSTAR President Ken Harper, who passed away on January 27 of this year. "Ken has been on the Bonspiel Committee every year since its inception sixteen years ago," says Doug. "He was a fine man and a credit to both his profession and his community. He will be sorely missed." 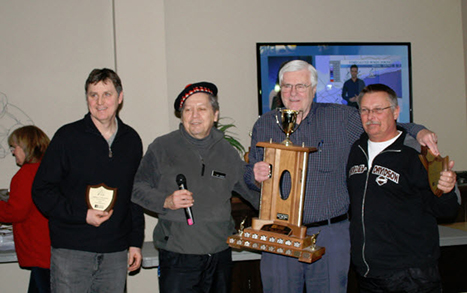 "We must also thank Past LSTAR President Glen Gordon, who has headed up the Bonspiel's organizing committee from its very beginning," concluded Doug Pedlar.