The London and St Thomas Association of REALTORS® (LSTAR) announced another record month for residential sales in April, with a total of 1,220 homes sold, an increase of 14.2% over the same period last year. This represents the best results ever for April, since LSTAR began tracking sales data in 1978.

"Since the beginning of the year, every month has achieved record sales. After the first four months, we're about 25 percent ahead in home sales compared to 2016," said Jim Smith, LSTAR President. "It just shows how desirable the region is, when you consider affordability, accessibility and lifestyle. London and St. Thomas have so many features that make them attractive destinations to live, work, raise families and retire. We've got farm-to-table restaurants, London Knights hockey, big-name concerts and culture, such as the North American Railway Hall of Fame and the Grand Theatre."

"With this robust marketplace, it's a fantastic time to get in touch with a REALTOR®," Smith said. "With an increase in multiple offer situations, interest from outside of London and St. Thomas, and the regulatory requirements, a REALTOR® can help you manage the process every step of the way."

The following chart is based on data taken from the Canadian Real Estate Association's (CREA) National MLS® Report for March 2017 (the latest statistics available). It provides a snapshot of how average home prices in London and St. Thomas compare to other major Ontario and Canadian centres. 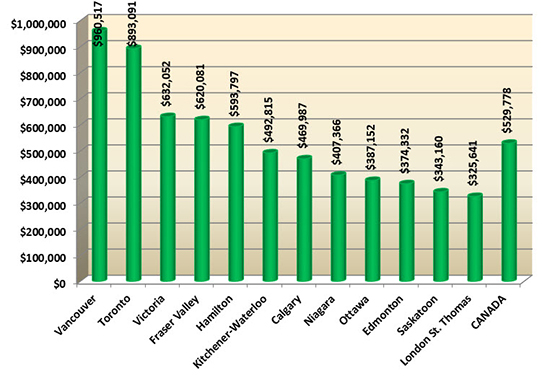 According to a research report1, one job is created for every three real estate transactions and approximately $53,000 in ancillary spending is generated every time a home changes hands in Ontario. "Based on the record sales in April, that translates into creating potentially over 400 jobs and positioning us to potentially generate $64 million back into the local economy for London and St. Thomas," Smith said.