Local home sales decreased more than 50% in April, as the COVID-19 pandemic and the social distancing rules incurred by it slowed the momentum on what was shaping up to be another record year for LSTAR REALTORS®.

"As anticipated, the volume of sales was one of the lowest for April since the Association started tracking data, back in 1978," said 2020 LSTAR President Blair Campbell. "However, when analyzing these figures, one has to take into account a few facts: at the beginning of April, the Government of Ontario prohibited open houses, many Sellers decided to postpone putting their properties on the market and many REALTORS® stopped trading in order to protect their families and their clients. Now, with the provincial Government planning to re-open the economy, we are expecting that, once that happens, the local markets will start to gradually recover," he added.

Compared to a year ago, the overall average home price saw an increase of 0.4%, rising to $423,143 in April. This average sales price includes all housing types - from single detached homes to high rise apartment condominiums. In the five major areas of LSTAR's region, average home sales price performed differently. The following table illustrates last month's average home prices by area and how they compare to the values recorded at the end of April 2019.

The following chart is based on data taken from the CREA National Price Map for March 2020 (the latest CREA statistics available). It provides a snapshot of how home prices in London and St. Thomas compare to some other major Ontario and Canadian centres. 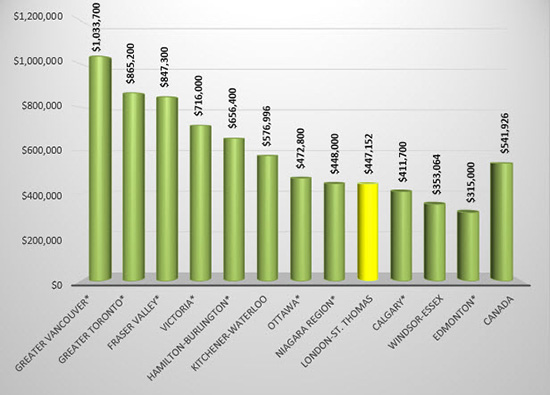 According to a research report[1], a total of $67,425 in ancillary expenditures is generated by the average housing transaction in Ontario over a period of three years from the date of purchase.

"This means that our April home sales would bring more than $20 million back into the local economy throughout the next few years," Campbell said. "The business of real estate is one of the most important drivers of the economy. That is why we are trying hard to provide our Members with the knowledge and tools they need to continue trading in these most unusual circumstances," Campbell concluded.