Home sales remain steady in December, capping off a strong year for real estate across the region

London and St. Thomas Association of REALTORS® (LSTAR) announced 439 homes* were sold in December, up 2.1% over December 2017 and right on par with the 10-year average. The number of home resales for the year was 8,690, down 13.3% compared to 2017, which set a record year for residential real estate.

"One of the trends that stood out in December was the sales-to-new listings ratio, which was 108.1% across the region," said Jeff Nethercott, 2018 LSTAR President. "It's a statistic the Canadian Real Estate Association (CREA) says represents conditions in the marketplace that favour sellers (a ratio between 40% and 60% is generally consistent with a balanced market). In London, the sales-to-new listings ratio was 119.7%, while in St. Thomas it was 100.0%."

"Overall, it was a very solid year for home resales in London and St. Thomas," Nethercott said. "The activity in 2018 performed well above the 10-year average, despite the record low inventory levels seen in the marketplace the entire year. As we kick off 2019, I believe home sales will continue to be strong and be a driving force to the local economy."

The following chart is based on data taken from the CREA National MLS® Report for November 2018 (the latest CREA statistics available). It provides a snapshot of how average home prices in London and St. Thomas compare to other major Ontario and Canadian centres. 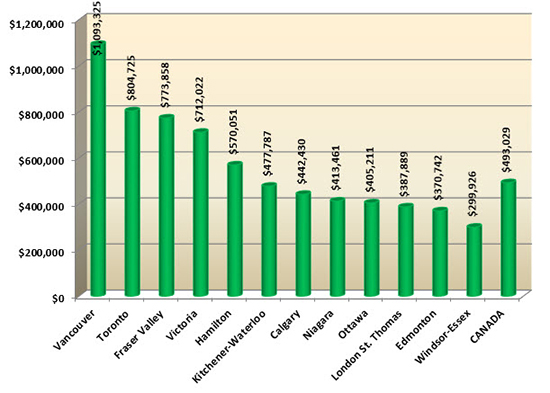 According to a research report1, one job is created for every three real estate transactions and approximately $53,000 in ancillary spending is generated each time a home changes hands in Ontario. "We can't underestimate the impact the business of real estate has on all the communities LSTAR passionately serves," Nethercott said. "Based on the total home resales for 2018, this translates into creating approximately 3,200 jobs and generating potentially more than $519 million – a half billion dollars – back into the local economy."

*These statistics are prepared for LSTAR by the Canadian Real Estate Association (CREA) and represent a data snapshot taken on January 1, 2019, based on processed home sales activity between December 1 and 31, 2018.