The London and St Thomas Association of REALTORS® (LSTAR) announced 802 homes exchanged hands last month, marking the third consecutive year that more than 800 homes were sold in the month of September*.

"Home sales are slightly down compared to last September, but we are still on track to achieve a record sales year for 2017," said Jim Smith, 2017 LSTAR President. "We're experiencing activity that signifies a more balanced marketplace, and expect a strong finish to the year."

"The activity echoes what's happening in many other parts of the country," Smith said. "According to the Canadian Real Estate Association (CREA), there was a roughly even split of local markets where sales posted a slight decline and others saw a slight increase. I want to stress our region's marketplace continues to be healthy, and your best source to help you navigate what's trending is a local REALTOR®."

The following chart is based on data taken from the Canadian Real Estate Association's (CREA) National MLS® Report for August 2017 (the latest CREA statistics available). It provides a snapshot of how average home prices in London and St. Thomas compare to other major Ontario and Canadian centres. 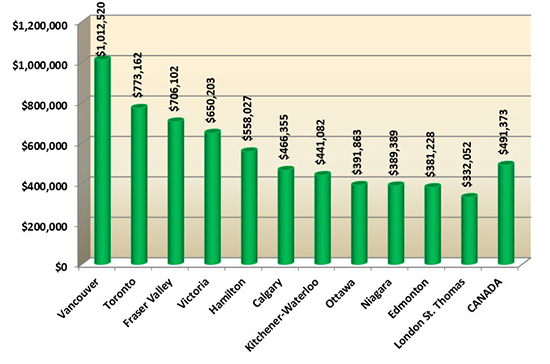 According to a research report1, one job is created for every three real estate transactions and approximately $53,000 in ancillary spending is generated every time a home changes hands in Ontario. "Based on the monthly total for September, that translates into creating approximately 267 jobs and positioning us to potentially generate more than $42 million back into the local economy," Smith said.

*These statistics represent a data snapshot taken on October 1, 2017, based on reported sales activity between September 1 and 30, 2017.