London and St. Thomas Association of REALTORS® (LSTAR) announced 776 homes* were sold in September, down 6.1% over the same month last year. The number of home resales are above the 10-year average, despite low inventory in the marketplace.

“All year we’ve been managing the challenges of low supply and it continues to impact home resales,” said Jeff Nethercott, 2018 LSTAR President. “What we did experience was a large increase in the average price for resale activity. In September, the average sales price was $386,520, up 21.0% compared to a year ago, and up 57.9%, compared to just five years ago.”

“While the average price for home resales may be on the rise, inventory (what is called active listings) continues to decline,” Nethercott said. “Last month, there were 1,640 active listings in LSTAR’s jurisdiction, marking the lowest level of September inventory in the past 10 years. The sales-to-new listings ratio was 64.5%, which the Canadian Real Estate Association (CREA) says represents conditions in the marketplace that favour sellers (a ratio between 40% and 60% is generally consistent with a balanced market). Breaking it down further by geography, London East had a sales-to-new listings ratio of 76.8%.”

The following table is based on data taken from the CREA National MLS® Report for August 2018 (the latest CREA statistics available). It provides a snapshot of how average home prices in London and St. Thomas compare to other major Ontario and Canadian centres. 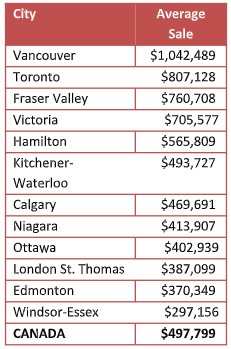 According to a research report1, one job is created for every three real estate transactions and approximately $53,000 in ancillary spending is generated each time a home changes hands in Ontario. “It is critical to understand the huge economic impact the business of real estate makes across the entire region and beyond,” Nethercott said. “The September resale activity has generated potentially more than $41 million and helped create approximately 258 jobs, affecting every facet of real estate, from retailers to contractors, and manufacturers. We cannot underestimate the contributions this profession delivers to the community.”

The London and St. Thomas Association of REALTORS® (LSTAR) exists to provide its REALTOR® Members with the support and tools they need to succeed in their profession. LSTAR is one of Canada’s 15 largest real estate associations, representing over 1,700 REALTORS® working in Middlesex and Elgin Counties, a trading area of 500,000 residents. LSTAR adheres to a Quality of Life philosophy, supporting growth that fosters economic vitality, provides housing opportunities, respects the environment and builds good communities and safe neighbourhoods and is a proud participant in the REALTORS Care Foundation’s Every REALTOR™ Campaign. *These statistics are prepared for LSTAR by the Canadian Real Estate Association (CREA) and represent a data snapshot taken on October 1, 2018, based on processed home sales activity between September 1 and 30, 2018.