London and St Thomas Association of REALTORS® (LSTAR) announced 1,000 homes* were sold in July, down 1.8% over the same time last year. July 2018 marked the third best July for home resales since the Association began tracking sales data in 1978.

"The numbers tell us we’re experiencing a very healthy summer for home resales," said Jeff Nethercott, 2018 LSTAR President. "This is the third consecutive month of at least 1,000 homes being sold and the resale activity remains above the 10-year average. Inventory remains at a 10-year low, while we continue to see an increase in average sales price."

“One of the biggest trends in 2018 is the lack of inventory,” Nethercott said. “In July, there were 1,721 active listings, down 10.9% from this time last year and down 55% from July 2015. The sales-to-new listings ratio was 78.9%, which the Canadian Real Estate Association (CREA) says represents conditions in the marketplace that favour sellers (a ratio between 40% and 60% is generally consistent with a balanced market). In London East, the sales-to-new listings ratio was 89.1%, while in London South it was 81%.”

The following chart is based on data taken from the CREA National MLS® Report for June 2018 (the latest CREA statistics available). It provides a snapshot of how average home prices in London and St. Thomas compare to other major Ontario and Canadian centres. 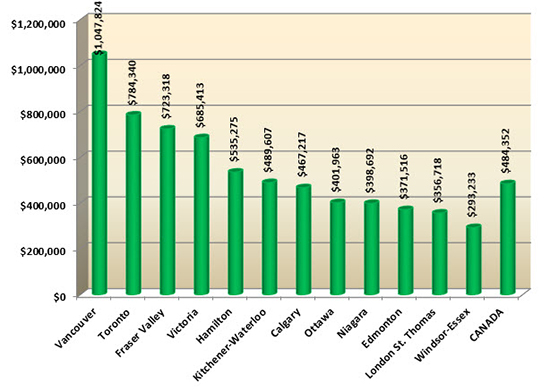 According to a research report1, one job is created for every three real estate transactions and approximately $53,000 in ancillary spending is generated each time a home changes hands in Ontario. “The business of real estate affects all of us, with huge impact to the local economy, generating potentially more than $53 million in July,” Nethercott said. “The home resales have helped create approximately 333 jobs, making a significant contribution to the well-being and quality of life for the communities of London and St. Thomas.”

*These statistics are prepared for LSTAR by the Canadian Real Estate Association (CREA) and represent a data snapshot taken on August 1, 2018, based on processed home sales activity between July 1 and 31, 2018.

The London and St Thomas Association of REALTORS® (LSTAR) announced 1,194 homes exchanged hands last month, the highest number of home sales recorded via the MLS® system for the month of June since

Residents rate their cities in key areas, including quality of life, housing affordability and the municipal response to COVID-19