981 homes exchanged hands last month, up 23.4% from June 2013. "Everything was up," says Jim Holody, President of the London and St. Thomas Association of REALTORS®. "Detached homes were up 22.3%, condos were up 28.4% and listings were up 18.6%. An increase in listings is good news because it means our market remains a balanced one. In addition, the Year-to-Date sales total 4,337, up 2.8%. There's no question but it's a happening market out there. Our Members have been telling us that the market has been playing catch-up to adjust for the unusually cold winter; the stats for the last two months certainly bears that out." He goes on to point out that, "Low interest rates, the conclusion of the provincial election and strong consumer confidence all contributed to making last month the best June since 2007 – itself a record year."

Average sales prices were also up: $278,493 for a detached home, up 1%; and $197,026 for a condo, up 1.6%. "A healthy real estate market is one in which you see small, incremental increases in house prices over time," explains Holody. "This indicates that properties are holding their value and there's no danger of a housing bubble.”

The following chart, based on data taken from CREA's National MLS® Report for May 2014 (the latest information available), demonstrates how homes in LSTAR's jurisdiction continue to maintain their affordability compared to other major Ontario and Canadian centers. 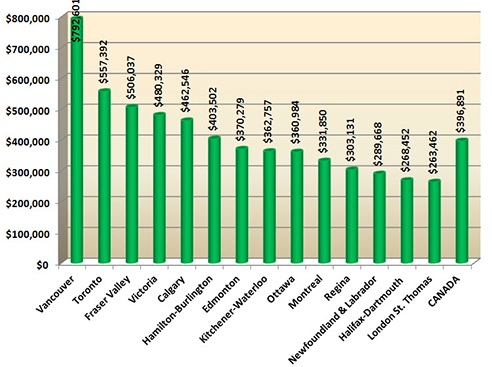 The best-selling house style in LSTAR's jurisdiction for June 2014 was the two-storey, then the bungalow, followed by ranches, then townhouse condominiums. One and a half storey homes came in next, followed by high rise apartment condos.

Read the full News Release of LSTAR for June 2014.