The London and St Thomas Association of REALTORS® (LSTAR) announced that home sales in the London-St. Thomas area continued at a healthy pace in August, with 892 homes exchanging hands.

"Compared to August 2016, which holds an unprecedented record, the August 2017 numbers represent a slight decrease in homes sales activity. However, if you look at the historical data, last month turns out to be the best August for our REALTOR® Members since 2005," said Jim Smith, 2017 LSTAR President. "Overall, 2017 remains an incredible year for real estate across London and St. Thomas and we expect sales activity to stay fairly strong for the remainder of 2017."

"With real estate impacting so many areas of our community, such as contractors, trades, home stores and small businesses, it plays a significant role to building the local economy," Smith said. "LSTAR REALTORS® are passionate about delivering the best experience to consumers and I want to stress it’s a great time to get in touch with a REALTOR® who can support all your real estate needs in this robust marketplace."

The best-selling house style in August in LSTAR's jurisdiction continues to be the two-storey, followed by the bungalow. "Interestingly, last month the number of sold units was the same for ranches and townhouse condominiums, which might reflect a shift in the area's inhabitants' lifestyles choices," Smith observed.

The following chart is based on data taken from the Canadian Real Estate Association's (CREA) National MLS® Report for July 2017 (the latest CREA statistics available). It provides a snapshot of how average home prices in London and St. Thomas compare to other major Ontario and Canadian centres. 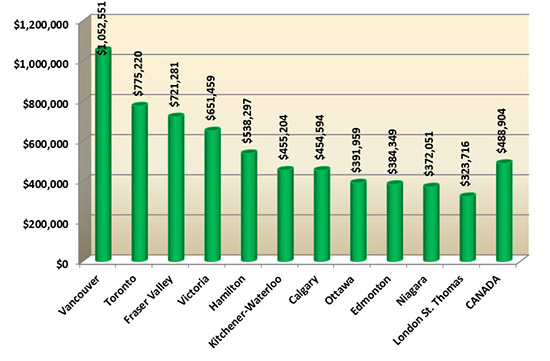 According to a research report1, one job is created for every three real estate transactions and approximately $53,000 in ancillary spending is generated every time a home changes hands in Ontario. "Based on the monthly total for August, that translates into creating approximately 297 jobs and positioning us to potentially generate nearly $47,276,000 back into the local economy," Smith concluded.