The Board of Directors of LSTAR congratulates Doug Pedlar, its 2013 President, on having won the prestigious 2012 Ontario Real Estate Association (OREA) Volunteer Leader Award. This award recognizes an individual who has played an important role or addressed a major issue or challenge facing his or her association over the past year. 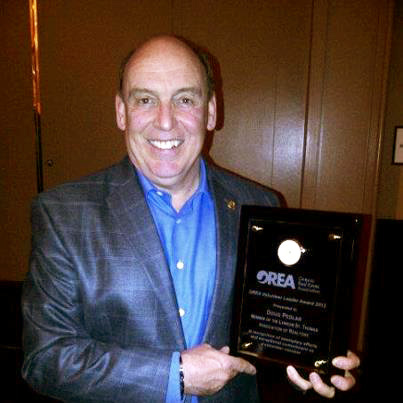 “In our estimation, Doug's ongoing efforts over the past year to educate Organized Real Estate, real estate associations and the public on the potential negative impacts of wind turbines on human and animal health and on property values made him an absolute stand-out for the OREA Volunteer of the Year Award," says Barb Whitney, 2012 LSTAR President. "Not only did he thoroughly research the issue himself and put together his own presentation on the subject, he took that presentation across the province in 2012, speaking to a total of twenty different groups."

A podcast of Doug's presentation, which has received to date over 2,500 viewings on YouTube, may be found below.

"Motivated by a really genuine concern for the people of Ontario and their Quality of Life, Doug devoted enormous amounts of personal time and energy to this cause," says Betty Doré, LSTAR's Executive Vice-President. "Opposition to the way in which the Green Energy Act was rolled out was not an easy sell in all circles, especially at first. However, he persevered and the questions he was among the first to raise are now the subject of much public debate."

"Needless to say, we are all very proud of Doug,” adds Whitney. The award was presented to Mr. Pedlar at the OREA Leadership Conference in Toronto on March 6, 2013.

Click here to read the full news release of LSTAR.