The London and St Thomas Association of REALTORS® (LSTAR) announced 769 homes* were sold in March, down 37.9% over March 2017, which set a record for best March results since LSTAR began tracking sales data in 1978.

“The marketplace is still being challenged with low levels of housing inventory, which continues to impact sales across the region,” said Jeff Nethercott, 2018 LSTAR President. “Looking at inventory, there were 1,192 Active Listings, down 20.4% from this time last year and down 55.3% from March 2016. Similar to February, the March inventory is the lowest level for the month in the last 10 years.”

“Another interesting statistic that paints a picture of the marketplace is the sales-to-new listings ratio,” Nethercott said. “According to the Canadian Real Estate Association (CREA), a ratio between 40% and 60% is generally consistent with a balanced housing market. In March, London and St. Thomas had a sales-to-new listings ratio of 75.1%, which CREA says represents conditions in the marketplace that favour sellers. It reinforces the trends LSTAR Members have been experiencing, with low supply and high demand, and also managing multiple offer situations and out-of-town interest in our region.”

St. Thomas saw a total of 73 homes sold in March, down 29.1% from the same period last year. When looking at inventory, there were 42 active listings, down 51.2% from last March.

The following chart is based on data taken from the CREA National MLS® Report for February 2018 (the latest CREA statistics available). It provides a snapshot of how average home prices in London and St. Thomas compare to other major Ontario and Canadian centres. 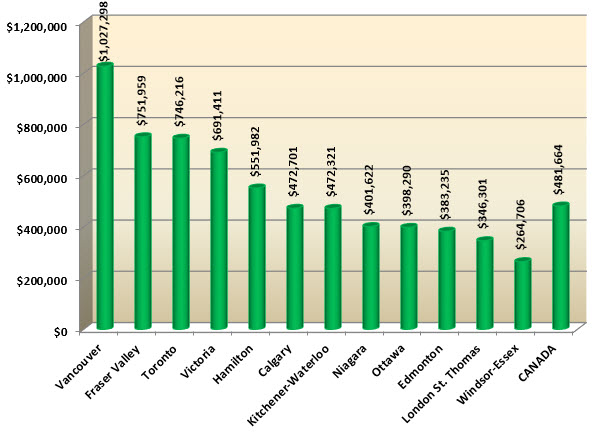 According to a research report1, one job is created for every three real estate transactions and approximately $53,000 in ancillary spending is generated every time a home changes hands in Ontario. “Real estate makes a tremendous contribution to growing the regional economy and beyond, generating potentially more than $40 million right here in London and St. Thomas,” Nethercott said. “This broad impact also helped create approximately 256 jobs in March, further boosting the robust economic engine of southwestern Ontario.”