Market slow to warm up

A total of 498 homes sold in February 2014, down 13.5% from the previous year. "The first couple of months of the year are traditionally slow months for real estate," says Jim Holody, the 2014 President of the London and St. Thomas Association of REALTORS®. "Factor in some of the coldest temperatures in recent memory and one winter storm system after another and you've got a market in deep freeze. Fortunately, the only thing wrong with our market is the weather and that's about to change. Buyers who want to get ahead of the game would do well to get out in front of the crowd. The Spring market is going to start to kick in this month and I think we're going to see some pent-up demand start to change the equation."
Listings for the month were up a marginal 0.2%, while inventory – active listings end of period – were up 4.3%. "In other words, there's lots of supply," says Holody.
The City of St. Thomas saw 42 homes exchange hands in February, 8 short of the previous February. Listings were up 11.4% and the average price for a home in St. Thomas, Year To Date, stands at $210,695, up 11% compared to December 31, 2013.
The average price of a detached home in LSTAR'S jurisdiction in February 2014 stood at $260,411, down 0.8% from January 2014, while the price of a condo rose 5.9% to $179,387. The average price for all homes sold in the LSTAR's jurisdiction in February 2014 was $243,002 down 1.3% from the first month of 2014.
The following chart, based on data taken from CREA's National MLS® Report for January 2014 (the latest information available), demonstrates how homes in LSTAR's jurisdiction continue to maintain their affordability compared to other major Ontario and Canadian centers. 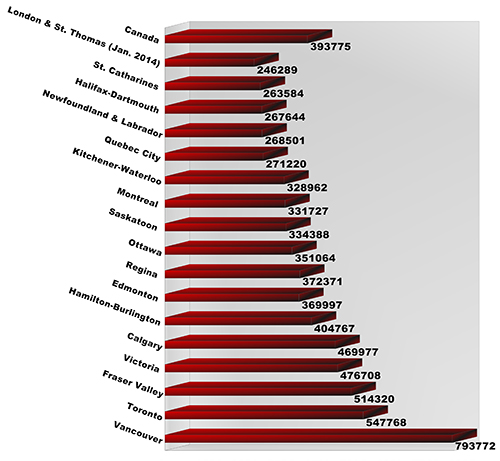 The best-selling house style in LSTAR's jurisdiction for February 2014 was the two-storey, followed by the bungalow, the ranch and then the townhouse condominium.