Listings were also up 5.4%, while inventory – active listings end of period – were down a marginal 0.2%. "We still have a good supply of listings," says Vandergoot, "and our market continues to be a balanced one, good for both buyers and sellers. However, supply does seem to be tightening up a little, meaning that, if anybody's thinking of listing their home, now might be an excellent time to do it."

The best-selling house style in LSTAR's jurisdiction for April 2015 was the two-storey, then the bungalow, followed by ranches, then townhouse condominiums, then high rise apartment condos.

The following chart, based on data taken from CREA's National MLS® Report for March 2015 (the latest information available), demonstrates how homes in LSTAR's jurisdiction continue to maintain their affordability compared to other major Ontario and Canadian centers. 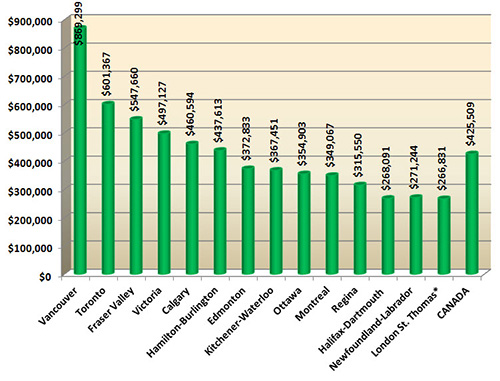 "London's affordability, along with its fine educational institutions and outstanding hospitals, makes it a great place for families and retirees alike," says Vandergoot. "We've got a lot to offer. Moreover, according to recent research conducted by the Altus Group, one job is created for every three real estate transactions and approximately $52,000 in ancillary spending is generated every time a house changes hands in Ontario. That's why strong home sales like we've seen last month are such good news for our area's economy."

Click here to see the original Statistical News Release of LSTAR for April 2015.

The London and St Thomas Association of REALTORS® (LSTAR) announced 1,194 homes exchanged hands last month, the highest number of home sales recorded via the MLS® system for the month of June since

Residents rate their cities in key areas, including quality of life, housing affordability and the municipal response to COVID-19