October 2015 homes sales came in just a hair lower than those of October 2014, the best October since 2007. A total of 695 homes exchanged hands last month, just three shy of October 2014, which saw 698 sales. 577 detached homes sold in October, up a marginal 0.9%, while condo sales dropped 6.3%. Total sales were down a very negligible 0.4%. "Clearly we've hit the mark and are holding steady," says Carl Vandergoot, President of the London and St. Thomas Association of REALTORS®. Year-to-date sales are up over 2014 by 9.8%.

The real estate market continued to perform well in St. Thomas in October. Fifty-five homes sold in that City, making it the best October since 2012. The average price of a home in St. Thomas Year-to-Date stands at $217,752 up 8.9%.

The following chart, based on data taken from CREA's National MLS® Report for September 2015 (the latest information available), demonstrates how homes in LSTAR's jurisdiction continue to maintain their affordability compared to other major Ontario and Canadian centers. 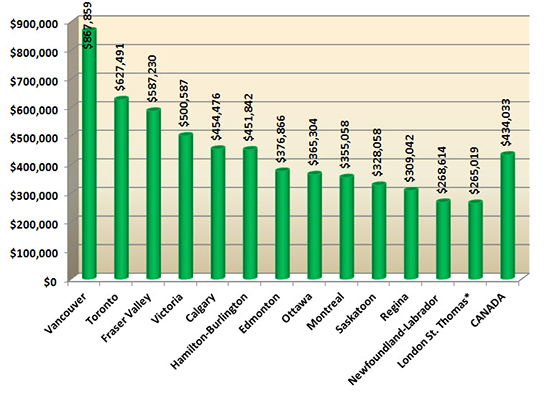 According to recent research conducted by the Altus Group, one job is created for every three real estate transactions and approximately $52,000 in ancillary spending is generated every time a house changes hands in Ontario. "That means October 2015's home sales spun approximately $36,140,000 into our local economy and created approximately 231 jobs," says Vandergoot. "The more transactions REALTORS® facilitate, the better it is for everybody."