For the fifth month in a row area home sales have exceeded those of the previous year:

682 homes sold in September 2014, making last month the best September since 2011. "Year to date, we've seen 6,778 homes exchange hands," says Jim Holody, President of the London and St. Thomas Association of REALTORS®. "That's 7.4% more transactions than last year at this time – great news for our area, given how many jobs home sales create and the amount of ancillary spending generated every time a house exchanges hands – approximately $55,000 in Ontario. That's why REALTORS® are taking steps to ensure that our municipal politicians know how much the imposition of a Municipal Land Transfer Tax would hurt our local economy. According to a study done by Altus Group Economic Consulting, the potential economic implications of such a tax on London, Ontario, in the period 2014-2018, would be a loss of $270 million in economic activity, a reduction of $140 million in GDP, a loss of 1,771 jobs at a time when things are just starting to turn around and a loss of $92 million in wages and salaries."

The following chart, based on data taken from CREA's National MLS® Report for August 2014 (the latest information available), demonstrates how homes in LSTAR's jurisdiction continue to maintain their affordability compared to other major Ontario and Canadian centers. 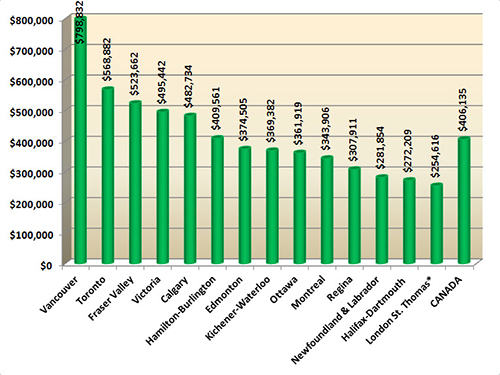 The best-selling house style in LSTAR's jurisdiction for September 2014 was the two-storey, then the bungalow, followed by ranches, then townhouse condominiums, then high rise apartment condos.

See the original news release of LSTAR for September 2014.