“There was a slump in resale housing activity nationwide between July 2012 and August 2012, with declines reported in about two-thirds of all local markets, including our own, ” says Barb Whitney, President of the London and St. Thomas Association of REALTORS®. “The data isn't in from around the country yet, but we're likely going to see a similar pattern play out this month as last.” She adds, “According to the Canadian Real Estate Association, recent changes to mortgage regulations are just now starting to have a dampening effect upon the market. Now that amortization periods for high ratio mortgages have been shortened, fewer first time buyers can qualify for a mortgage than previously. Lower first-time buying activity is a lynchpin of the housing market and its curtailment was bound to have downstream effects over the rest of the market.” Year-to-Date home sales are even with last year's.

New listings were also down 11.9%, while inventory – the number of active listings at month end – was down 8.7%. The Sales-to-New-Listings ratio, which measures the balance between demand and supply in a market, stood at 47% for detached homes in September 2012 and 42% for condos. “That's an indication that our market remains balanced,” says Whitney.

The average price for a home in LSTAR's overall jurisdiction also continues to rise. Year-to-Date the average price stands at $238,808, up 2.8% compared to December 31, 2011. The following chart, based on data taken from CREA's National MLS® Report for August 2012 (the latest information available), demonstrates how homes in LSTAR's jurisdiction continue to maintain their affordability compared to other major Ontario and Canadian centers. 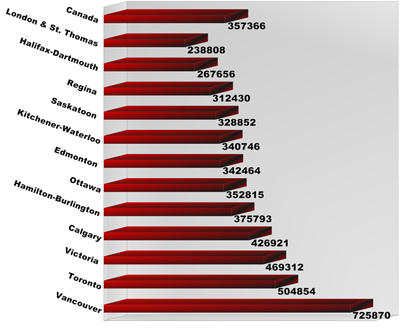