"In September, home resales across the region were up 11.8%, compared to the same month last year," said Earl Taylor, 2019 LSTAR President. "With three months left in the year, almost 8,000 homes have exchanged hands, which is up 3.6%, compared to this period in 2018."

Meanwhile, inventory remains low, with active listings at 1,841, up 8.8%, compared to September 2018. This number is well below the 10-year average. For comparison, this is down 22.6% compared to three years ago and down 49.6% compared to five years ago.

"What we're experiencing with low inventory has had an impact on the average home sales price," Taylor said. "Each of the five major areas in LSTAR's jurisdiction saw an increase last month. It was up 20.4% in Elgin County, up 6.6% in Middlesex and up 6.5% in Strathroy. London and St. Thomas also saw gains, up 5.1% and 4.3% respectively."

Looking closer at London by geographic area, the average price in London East was $343,404, up 13.7% from last September. In London South (which includes data from the west side of the city), the average home sales price was $406,388, up 5.4% compared to the previous year, while London North saw a slight decrease of 2.2% over last September, with an average home sales price of $485,102.

The following chart is based on data taken from the Canadian Real Estate Association (CREA) National MLS® Report for August 2019 (the latest CREA statistics available). It provides a snapshot of how average home prices** in London and St. Thomas compare to some other major Ontario and Canadian centres. 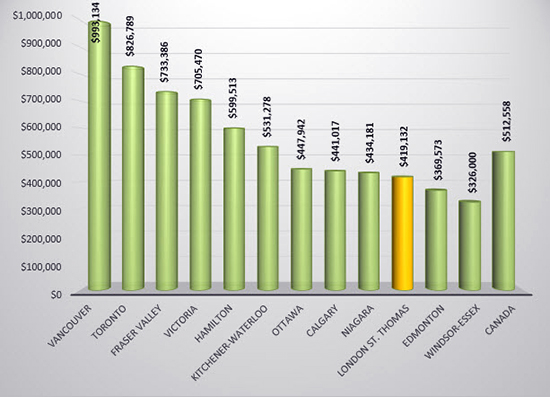 According to a research report1, a total of $67,425 in ancillary expenditures is generated by the average housing transaction in Ontario over a period of three years from the date of purchase. "Based on the home resales in September, that's generating potentially more than $58 million back into the local economy for the next few years," Taylor said.

*These statistics are prepared for LSTAR by the Canadian Real Estate Association (CREA) and represent a data snapshot taken on October 1, 2019, based on processed home sales activity between September 1 and 30, 2019.

The London and St Thomas Association of REALTORS® (LSTAR) Board of Directors is pleased to announce London-based REALTOR® Jack Lane will serve as its President in 2021.

Despite the COVID-19 pandemic, 2020 proved to be the second best year for home sales in the history of the London and St. Thomas Association of REALTORS® (LSTAR).