London and St Thomas Association of REALTORS® (LSTAR) announced 923 homes* were sold in August, up 2.2% over the same time last year. August 2018 marked the second best August for home resales since the Association began tracking sales data in 1978. August 2016 holds the record, with 999 home resales.

"It was a very strong summer for home resales, with August achieving very solid numbers," said Jeff Nethercott, 2018 LSTAR President. "Resale activity has performed high above the 10-year average, despite low inventory, which the marketplace has experienced all year. The average sales price continues to rise: it was $378,511, up 18.0% from August 2017. When you go back five years, that’s up 54.2% compared to August 2013."

The following chart is based on data taken from the CREA National MLS® Report for July 2018 (the latest CREA statistics available). It provides a snapshot of how average home prices in London and St. Thomas compare to other major Ontario and Canadian centres. 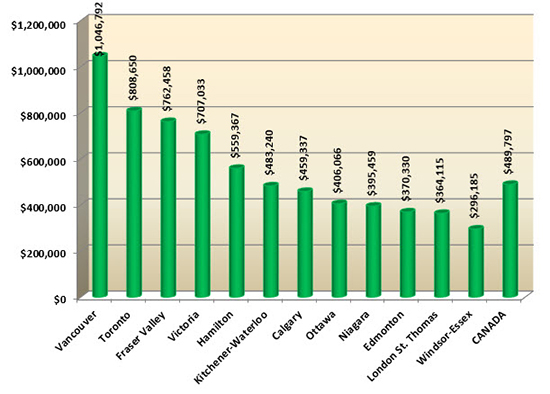 According to a research report1, one job is created for every three real estate transactions and approximately $53,000 in ancillary spending is generated each time a home changes hands in Ontario. "The home resale activity has given a huge boost to the economy of southwestern Ontario, generating potentially more than $48 million in August," Nethercott said."The 923 home resales in August have also helped create approximately 307 jobs, reinforcing the contributions the business of real estate makes for the entire community."

*These statistics are prepared for LSTAR by the Canadian Real Estate Association (CREA) and represent a data snapshot taken on September 1, 2018, based on processed home sales activity between August 1 and 31, 2018.