The London and St. Thomas Association of REALTORS® (LSTAR) announced 1,002 homes were sold in July, the best July monthly total in 10 years and an increase of 1.2% over the same period last year. July 2007 holds the all-time July monthly record with 1,009 sales, since LSTAR began tracking sales data in 1978*.

"This is an amazing year for real estate in our region. Although shy of the best July ever by a handful of units, home sales are still performing strongly, with year-to-date sales outpacing 2016 by almost 20 percent," said Jim Smith, LSTAR President. "We are still seeing transactions involving out-of-town agents, but not at the levels we experienced in the spring. The activity is signifying we may be heading toward a more balanced marketplace. In the dog days of summer, we traditionally experience a quieter market, but that’s not the case this year. Now’s the time to get in touch with a REALTOR® to take advantage of this robust market."

"The greater real estate community is contributing to the steady growth of our local economy,” Smith said. “The City of London just reported that it has issued more building permits compared to last year at this time, another sign of how strong our marketplace is."

The following chart is based on data taken from the Canadian Real Estate Association's (CREA) National MLS® Report for June 2017 (the latest CREA statistics available). It provides a snapshot of how average home prices in London and St. Thomas compare to other major Ontario and Canadian centres. 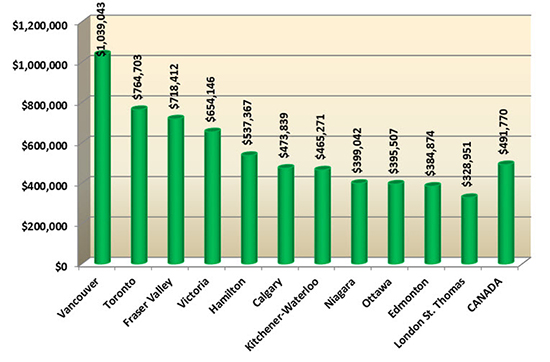 According to a research report1, one job is created for every three real estate transactions and approximately $53,000 in ancillary spending is generated every time a home changes hands in Ontario. "Based on the monthly total for July, that translates into creating potentially over 330 jobs and positioning us to potentially generate nearly $53 million back into the local economy," Smith said. "At the same time, with a very strong real estate market, we have to take a look beyond those numbers and consider the overall impact to the economy, affecting other sectors such as retail, transportation, entertainment, tourism and smart technology."

*These statistics represent a data snapshot taken on August 1, 2017, based on reported sales activity between July 1 and 31, 2017.