The winners of the "Don Smith" Commercial Building Awards, established by the Regional Commercial Council (RCC) of the London and St. Thomas Association of REALTORS® (LSTAR) and sponsored by D&H, CBRE, TD Commercial Banking and Honeywell Building Solutions, were announced last night (February 7, 2012) to a capacity crowd at the London Club.

The awards program was established, "to recognize, reward and celebrate excellence and innovation in commercial building right here at home." The program was named after Don Smith, legendary co-founder of EllisDon, a world-renowned construction company with London roots. 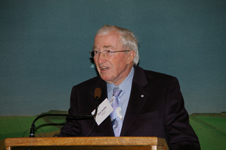 The 18 entrants to the competition were judged on how environmentally sensitive the individual buildings were; on design and innovation; and on the extent to which they met a specific developmental need within the broader community.

The panel of judges included:

Awards were presented for:

Click here to watch a slideshow with pictures from the 2011 Commercial Building Awards reception.