Year off to a slow start

2013 got off to a slow start, with 438 homes trading hands in January, down 3.5% from the previous January. “We're expecting a fairly flat, but stable market over the next year and these sales figures are pretty much in line with that," comments Doug Pedlar, President of the London and St. Thomas Association of REALTORS®. “Besides, January has never been a great month for real estate. Looking ahead, we have the Spring market and that will give us a better idea of how 2013 will shape up.”

New listings were down 3.8%, while inventory – the number of active listings at month end – was also down by 4%.

When compared to other comparable communities across Canada, the London CMA remains very affordable as the following chart illustrates. (The data is from December 2012 and the latest information available.) 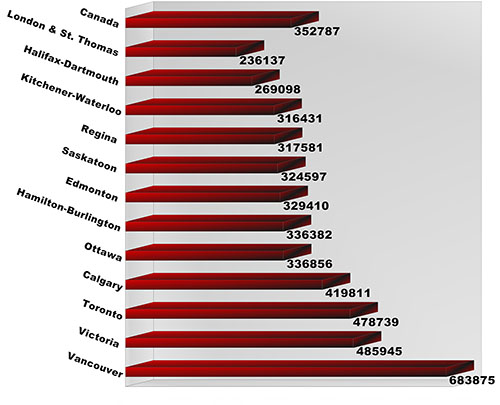 The best-selling house style in LSTAR's jurisdiction in January 2013 was the two-storey, followed by the bungalow, then the ranch, then the townhouse condominium.